Friends, Indians, Countrymen, Lend me your eyes! This one is a different venture from me! For the first time I am going to publish someone else’s work on my blog! This one’s a short poem written by Marathi Singer/Musician Avadhoot Gupte for the Purepur Kolhapur (पुरेपुर कोल्हापूर). It is found written on their Menu Cards and I must say it takes you right into Kolhapur! It doesn’t matter whether you have been to Kolhapur this poem will give you a feel that you are standing in Kolhapur while you read it. It made me nostalgic as I have been to Kolhapur and enjoyed the sights over there. Being a food crazy person and non-veg fanatic Kolhapur is like a seventh heaven for my taste buds (and me too!). This poem has made me nostalgic about Kolhapur. Read on and do make sure to inform me how you liked it via your comments! 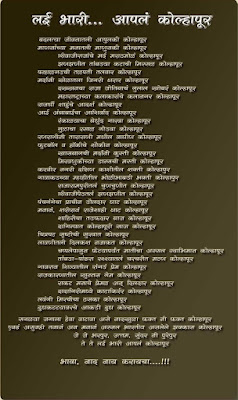 Mumbait nahi aahe Purepur Kolhapur asa vatta!
I would suggest going to Kolhapur itself instead of kolhapur.

Go to Padma Lunch Home at Padma Talkies in Kolhapur and enjoy instead of Purepu Kolhapur!

I know, although i havent visited the mumbai branch!
Thanks for the info that Puerpur Kolhapur does exist in Mumbai!
Even when I went to Pune Branch I did not like it …that is why I have recommended Padma Guest House to my friend in the second comment above yours!
Thanks very much for the comment!