The lessons to be learnt by Indians from an American flick………

My sir, Capt. Vanjari says “No movie is bad, all movies have a lesson to teach us!”

I believe it. I do not hate any movie. There is always something that can be learnt from any movie. Be it any ‘B’ grade flick or a high-budget mega project, each and every movie has something or the other to teach. Maybe we already know that lesson, but it does remind us that that lesson has to be revised 😉 Look carefully and you’ll learn something from each movie! 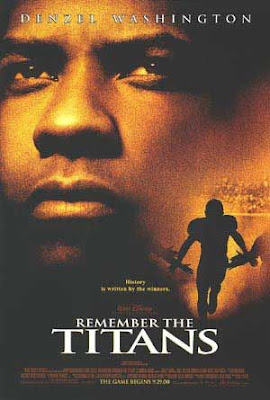 I saw ‘Remember the Titans’ about 2 years ago. I saw the relevance of that movie to the Indian scenario back then but thought of writing a blog-post about that relevance now.

Remember The Titans (RTT) is a movie based on a true story back in the 70’s when a law indicating co-education for ‘blacks’ and ‘whites’ was passed. The story is set in Alexandria,Virginia where (American) football is a way of life! A new coach is appointed, who is black, Coach Boone (Denzel Washington) by removing the current white coach, Coach Yoast (Will Patton) for the T.C. Williams High School football team (a.k.a The Titans). His job is to integrate both blacks and whites into the Team and make it a force to reckon with, a united team. He has to do this against the wrath of the white townsfolk, the authorities who are against a black-white football team and the mixed education system.

The movie’s ending lines are by Sheryl, daughter of Coach Yoast.

“People say that it can’t work,
black and white;
well here we make it work, everyday.
We have our disagreements, of course,
but before we reach for hate,
always, always,
we remember the Titans. “

Such a simple statement but such deep meaning!

Indian society may look integrated on top. But remove the top layer and you will see the harsh reality in the division of the society.

Religion, Caste, Sub-caste, Region, Language, Appearance.
You name it, we got it!

Friends become enemies, unknown and known people are beaten-up,burnt,killed, women are raped. All in the name of caste, religion and other petty factors that differentiate between humans. Two good friends do not hesitate to slit each others throats just because of the difference in their religion.

Two young lovers are not allowed to marry just because inter-caste, inter-religion, inter-region marriages are considered taboo. A pure emotion like love is not allowed to flourish. The ambitions and dreams of the youth which are the life-blood of this nation are dashed to death. People even do not know why they oppose such marriages. It is just because it has been told by their parents to them. Why such blind beliefs? Where is the rational man?

A turning point in the movie, RTT, is this scene where Coach Boone takes the team on a midnight run to a ground where the historical battle of Gettysburg was fought in the American Civil War. 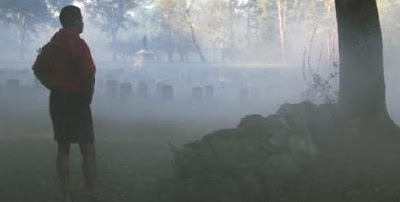 Have a look at this video:
The Gettysburg Speech

“This is where they fought the battle of Gettysburg. Fifty thousand men died right here on this field, fighting the same fight that we are still fighting among ourselves today.

This green field right here, painted red, bubblin’ with the blood of young boys. Smoke and hot lead pouring right through their bodies.

Listen to their souls, men.

I killed my brother with malice in my heart.

You listen, and you take a lesson from the dead.

If we don’t come together right now on this hallowed ground, we too will be destroyed, just like they were.

I don’t care if you like each other of not, but you will respect each other. And maybe… I don’t know, maybe

This statement is very much relevant to the Indian scenario. It may not look relevant, but go a little deeper, exercise your brain and you’ll see the identical situation.
I can see the relation to India can be seen in each and every line!

“…fighting the same fight that we are still fighting among ourselves today.”

“….I killed my brother with malice in my heart. “

Neighbour killed neighbour. Citizens of the same nation killed each other. Sons of same mother India killed their brothers and raped their sisters.

Countless families were uprooted and destroyed during these religious riots. Houses with entire families locked in them were burnt to ashes. Their screams still echo in the air.

” You listen, and you take a lesson from the dead.

If we don’t come together right now on this hallowed ground, we too will be destroyed, just like they were. “

If we do not come together as Indians by keeping aside our castes and our religions we shall be destroyed.

History is witness to this!

All the Indian rulers were strong but they were not united. So when an invading force much stronger than them attacked no one helped each other until all of them perished.

If we continue to divide the society on the basis of caste, religion then outsiders and external enemies will destroy us one by one.

Politicians, anti-social elements, religious fanatics are exploiting the nation and its resources by dividing it on the basis of caste, religion, language to satisfy their interests. For their small interests they are destroying the dreams of millions, throwing away lives like a rich man throws pennies for beggars.

They are selling our country to salesmen of terrorism for money. The country is going to the goons, dacoits, thieves.

Fix this in your mind.

No politician today wants to work for the nation. They are only interested in progressing their bank balance, not the country. We are a nation with 54% youth, but it is this youth that is not allowed to grow, their wings are cut even before they can spread them and fly just on the filthy basis of religion, caste ,and language!

When politicians tell you to exercise your right of voting it is not because they want to make you aware of your right or that they care for the nation. It is because there is a possibility that you will vote for them because they have told you about right to vote.

Some great politicians have now started beating up people just because they do not belong to a particular region or do not speak a particular language. All this under the false reason of saving the local culture and such bullshit. Creating a rift among the citizens of the nation and winning favour from a certain section of the society and hence winning their votes is one of their new pass times. And the worse part is, the youth are being attracted to these parties!

A person from the North-East states is teased and is called Chinese just because of his looks resemble the Chinese. Is he not Indian? Does he not love India? Does adrenaline not flow in his veins when he sings “Jana Gana mana…”? Why?

It is high time that we begin to trust and love the soul of a man rather than the look, the religion,the language and the caste of him!

All I can say to my Indian brothers and sisters,

“People say that it can’t work,
Religions,Regions,Castes,Colour;
well here we should make it work, everyday.
We may have our disagreements, of course,
but before we reach for hate,
always, always,
we should remember the Titans. “

One thing we should remember,always.

As Coach Boone says to his players before their first game,

“Tonight we’ve got Hayfield. Like all the other schools in this conference, they’re all white. They don’t have to worry about race. We do. Let me tell you something: you don’t let anyone come between us. Nothing tears us apart. In Greek mythology, the Titans were greater even than the gods. They ruled their universe with absolute power. Well that football field out there, that’s our universe. Let’s rule it like titans. “

India is a diverse land with equal diversity in regions, languages, religions. Keeping all these factors united is a difficult job. We have to do it as the educated youth of this country. Other nations may not have to worry about this diversity.

We should let nothing come between us.

In Greek Mythology, the Titans were even greater than the gods as they ruled their Universe with absolute power.

That country called India out there is our Universe. Lets rule it like the Titans.

PS:
1. Although the movie Chak De India highlights some of the aspects I have mentioned in the post. Remember the Titans is much much closer to my heart and is a much better movie.
2. This is a true story. You can check out the details on the Internet.

The horrible head-on collision at midnight!

while I haven’t seen the film, the way you have kept it in the Indian perspective, is nice.. the dialogues in fact apply to any place, read and liked those a lot…

@Gauri
Thanks a lot!
Do see the movie!

very interesting 🙂 bachcha has grown up 😀

we r allowed to grow… but in a confined circle….one step out of it and its over….thats y not many people achieve it….54% youth is rite….but 50 % is rural youth who is happy to light firecrackers after an election rally and get a 50 rupee note….

that is y somwhere i feel that a communist leader is the need….a dictator perhaps….to farfetched but 1 day som1 will be so pissed that it can happen….

remember that hitler was not anti-social….

he had high ambitions, over ambitious perhaps but he was loved by most of the masses.

hey pranjal…
ur post was really good…i specially liked the way in which u resembled it to the indians and lifestyle !..i dun think dictatorship can solve the problem…as there is bound to be opposition after some time considering the huge population and indivisual thinking ..but wat i think is we need strong leadership

WE cannot go to extremes just because we are not achieving what we want.
We have to strike a perfect balance in being autocratic at times and being democratic at times.

Hello, can you please post some more information on this topic? I would like to read more.

Could be better…but could also be worse…

a lot can happen over coffee…..

Cricket, Japan and Cutting Chai – I

When you fracture your toe…