“The Journey of a thousand miles begins with a single step”

Turns out, it was Lao Tzu, a Chinese philosopher, who penned it! 🙂

Anyways, our journey of a thousand kilometers – 1182 km to be precise – began not with a single step but with a chain of countless emails flying back and forth between us. Most of the times these emails had little to do with the planning of this trek/journey and more to do with making plans that would capsize like paper boats in a rain-water stream. We set out to plan something else and in the end, we ended up doing a totally different trek! (But atleast, we got something done! Move over, Montek Singh Ahluwalia!)

Our planning phase was like riding a roller coaster. Ups and downs made up the very soul of the plan. A team member quitting to go on another trek, an injury to someone, family issues and a thousand other problems made sure the days before our expedition were like an cricket match with India in it. Nail biting to the finish – no matter who the opponent is! We made sure the trek almost never happened before it finally happened!

So after many discussions and debates, we decided that we would set out to explore,experience and endure the shorter range of Sahyadris which spread out through Satara District.

We decided to visit the following 10 forts:

Here is a primary sketch of our route drawn by Ajay: 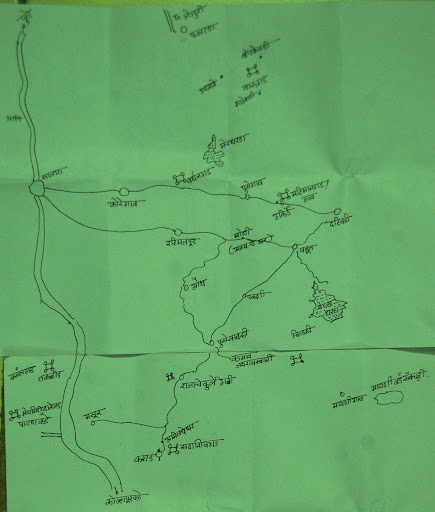 These forts are spread out from Phaltan which is south-east of Pune and then onwards move through Khatav-Maan regions and the chain ends at Karad.

To give a geographical description, the mountain range in this region known as Mahadevache Dongar – Shiva’s Mountains – is not high nor is it continuous. The mountains are scattered, some have plains on all sides as far as the eye can see. Since they are situated on the Deccan plateau they are already at MSL of about 1500-2000 feet and they do not rise much high in the sky nor do they have tall cliffs. Now due to this geographical characteristic of the mountains, the forts on them are heavily fortified. Almost all forts have a continuous wall along the perimeter and huge bastions, a feature which is absent in forts in the main Sahyadri range as the mountains there offer natural fortification in the form of vertical rock cliffs.  Many of these forts have an history ranging back to 1500-2000 years.

Finally, 4 of us were ready to set out. The team included Ajay Kakade, Anup Bokil, Amit Kulkarni and last but not the least, Me! 😉

My posts in this series will share with you our experiences and enjoyment while exploring a whole new region in Maharashtra.

Do watch out for updates soon!