“We have to reach Pune by today evening!”, Anup Bokil’s (Bokya) familiar chat window popped up on my screen. I had just reached my office and it was 1100 Hrs in the morning.I was definitely not ready for this! I immediately called him up!

“What the…!!??”, was my obvious stunned reply to his surprise attack on my Pearl Harbor!

A typical Bokil laugh followed through the speaker of the phone before Bokil told me, “ Can we leave at 4 pm? Ajay says if we can reach tonight we can leave early morning tomorrow morning and cover one extra fort!”

“How is possible, Bokil? I have just reached office!”

We were scheduled to begin our road trip/trek of 4 days at dawn on 15th August from Mumbai,reach Pune, pickup Ajay and Amit and proceed. From there we would travel over a thousand kilometres and cover 10 forts, some temples and a museum in a span of only 4 days!

Today was 14th August, 11 am, I had just entered my office  and had not even reached the ‘p’ of packing when Bokil sprung the surprise attack! He was suggesting we leave at 4 pm for Pune!

“No way! Lets leave late at night around 10pm!”,I negotiated.

“Arre try to understand, if we reach Pune tonight and leave early tomorrow and maybe cover one extra fort. Plus, the ‘pilot’ can get a good night’s sleep before the long drive the next day.And yes, all the people in Ajay’s house sleep early!”, Bokil put forth his terms.

“Ok Bokya, but I can make it 6pm, not a bit earlier!”, I said in the style of a typical negotiating shopkeeper making it sound like, “ This is my final offer! Take it or leave it!”

Luckily,Bokil agreed and we shot off in my Indica (रणगाडा- Tank) towards Ajay Kakade’s “Kakade Vishwa” in Pune. 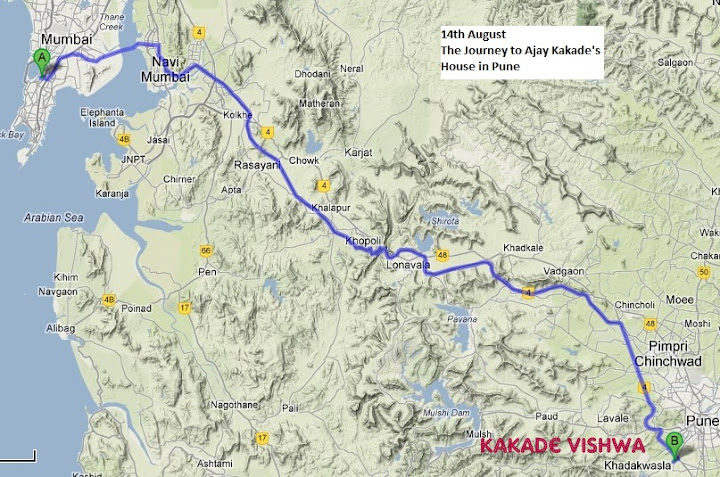 Our ride was pretty smooth, the only exception being the malfunctioning windshield wiper blades which reduced visibility to zero when the heavens opened up in a foggy Khandala Ghat! Thanks to Pune’s traffic we reached, Ajay’s house at around 1130pm where he welcomed me with a traditional “Namaskar Saheb!” and my mouth just fell open seeing his awesome collection of books and knives!

“ We will pick up Amit in the morning and then leave for Phaltan via Saswad!”, is what I thought Ajay said as my attention was diverted by a Gerber Bear Gryll’s Knife complete with a sharpener and  a Magnesium fire starter! This was really great stuff! I would love to shoplift here! 😉

After a hearty dinner and some talks about the route we were going to take, we finally decided to sleep around 1 am. I don’t remember when I dozed off, but the first sound of Bokil’s alarm opened my eyes at 04:45 am. I saw Bokil rise like The Undertaker through my groggy eyes in the dark and automatically looked at Ajay to see if he was awake.

A negative on that! I felt like I received a bonus when the company was about to be liquidated! I smiled to myself sleepily. It meant 15 more minutes of sleep till 5 am when we had to actually get up. Only sleep lovers like me will understand, the importance of those ‘2 minutes’ extra time in the morning! 🙂

We finally woke up after a ‘good’ sleep of 4 hours! Ajay brought us a really delicious and absolutely necessary cup of tea which I gulped down like a parched dog! With the Tea shaking awake our brains,we loaded up our vehicle with our bags and most importantly –Cameras! We also ensured we took the right road maps and books for reference (Courtesy: Ajay Kakade 🙂 ) and were, finally,ready to go but there was one more thing to do – Clean the car windshields! In this operation, Bokil’s natural altitude above sea level was of a great use as it provided that extra reach to clean the windshields! 😉

We set off for Warje, Amit’s House and after having another cup of tea, set off towards Phaltan via Kondhwa and Saswad. On the way, we would stop at Saswad to have a look at Sardar Purandare Wada, Godaji Jagtap Samadhi and Peshwa Balaji Vishwanath Samadhi and from there we would move forward to Santoshgad via Phaltan and then onward to Varugad. Thereafter at the end of the day, we would reach Loni, Ajay’s village and would reside at his house, more popularly known as Kakade palace!

To speak frankly, while these guys were rattling of names of villages and places which we would pass on our way like priests recite mantras during poojas, most of them were greek and latin to me! As I turned on the ignition key and my रणगाडा growled to life, I made a mental note to study all the maps whenever time permitted and get up to speed with the others!

As I put the car into gear and put the foot to the accelerator, I realized that today was 15th August, India’s independence day. In a way, we too were getting freedom today, that it was only for 4 days did not matter. The chance of being in the outdoors to us trekking fanatics, even for a day is enough. We love to be away from the civilized life, be away from the buzz of the cities, deep in the forests,valley! We love to  get lost inside the beautiful, thrilling and terrifying arms of Nature. For we believe, that getting lost in such a way will help us find ourselves in the depths of the mountains, find our lost ancestors who fought here making these very mountains their armor, who made the people rise like a glorious phoenix, fight for their rights, break the chains of slavery and achieve Freedom!

Sometimes, finding more about your country’s glorious past is, indeed, attaining Freedom!!