How To Order Viagra Online From India Order Cheap Levitra Allegra Fexofenadine Hcl 180 Mg Where To Buy Bactroban Cream Can You Buy Cephalexin Over The Counter
Pranjal WaghApril 13, 2009June 22, 2010 General

Support Greenpeace in its campaign to save Olive Ridley turtles.

Tata is building a port in Dhamra, Orissa which if completed will result in endangering the Olive Ridley turtles there.

Mr. Ratan Tata is not paying attention to Greenpeace’s demands of stopping the ongoing construction that will affect the turtles badly nor is he ready to move the port elsewhere.

I just hope Mr. Tata starts paying attention to the planet that we all are obliged to protect and conserve and just for one time keep aside our businesses and think about the how the earth will profit from our actions. Moreover he will be setting an eco-friendly example for other Indian industrialists.

Here is how the media is helping out Greenpeace:

Here is an advertisement that Greenpeace had published in ET and The Herald Tribune, papers that Mr. Tata reads, 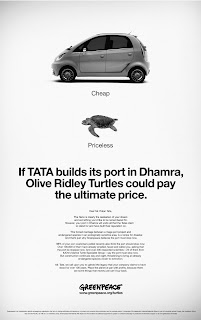 The details of this campaign can be seen HERE

Please expect more blogposts from me supporting this issue.

Subscribe to this author's posts feed via RSS
Uncategorized
Logging In...