Shivaji is the Tiger………..Excerpts from The ShivarajBhushan by MahaKavi Bhushan Tripathi 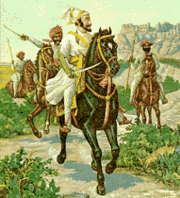 The following poem is but a part of this splendid composition. It touches upon all the virtues of the great warrior and rightly compares Shivaji Maharaj with the Gods.

This poem is currently a part of the Title track of the Grand Marathi Serial, Raja ShivChhatrapati, which is aired on Star Pravaah every Monday-Friday at 08:30pm. Check out the poem, its meaning and then watch the video and read the poem alongwith the song. If you do not get an adrenaline rush…..talk to me then!

Here is the poem:

I have tried my level best to translate and decipher the meaning this piece of poetry. If any errors are found please do forgive me. Point out the errors and I will correct them faster than the speed of sound. Here goes:

Meaning:
(Shivaji Maharaj is:) Like Lord Indra who defeated the evil forces of the demons. Like small Vamana who was an avtaar of Lord Vishnu, defeated the mighty Asur King Bali by just asking cleverly for alms while the Yagna was on.

{The story is that Bali, the grandson of King Prahlada was a very valorous and mighty asura . By his penance and might, he conquered the whole world. Indra and other gods fearing that he and asuras would conquer all the three worlds, went to Lord Vishnu for help. Lord Vishnu was then born as a dwarf Vamana in the household of a Brahmana. He went to Bali on growing up and asked for alms during a yagna.

Bali was delighted to offer him anything he requested even though his priest warned him that it was Lord Vishnu.Vamana then requested for the amount of land that could come under three of his steps. Bali gracefully agreed. Lord Vishnu then grew in size and covered the earth and heaven in two stride. And due to lack of space, he put his third step on Bali himself and crushed Bali to the nether or the Patala loka(underground world), thus helping the Gods out.}

(Shivaji Maharaj is:) Like the King Ram great Raghu Dynasty who defeated the mighty forces of Lord Ravana of Lanka with the help of an army of monkeys!

(Shivaji Maharaj is:) Like Lord Shiva who slew Rati’s husband,Kama,the lord of desire by opening his Third Eye and burning him to ashes!
(Thus implies Kavi Bhushan, that it is Shivaji who will burn down the evil Mughals and Adilshah to ashes!) Like Lord Parshurama, the sixth avatar of Vishnu, who was the saviour of defeated the Haihaya King Kartavirya Arjuna also called as Sahasrabahu or Sahasrarjuna, as he had a thousand hands.

{Parshurama was the son of Sage Jamadagni and Renuka.Parshurama was so called as his favourite weapon was a Parashu (axe). Legend has it that King KartaVirya Arjuna was drunk with power and used to trouble the brahmanas by stealing away their cattle, disturbing their pennances and their yagnas. Once, The king KartaVirya Arjuna visited Jamadagni’s ashram with his army. Jamadagni welcomed and fed the king and his army with the help of his cow, Kamadhenu. The king was amazed and asked Jamadagni for the cow. Jamadagni refused to yield as he would need the cow for religious practices. Angered, Arjuna destroyed the ashram and took away the cow forcibly. When Parshurama came to know about this, he killed the entire army of the king and then killed the King himself by cutting of each of the King’s arms by using his axe. The King’s sons retaliated and killed Jamadagni while he was meditating. When Parshurama returned and found his mother crying he asked her the reason for her sorrow. His mother did not reply but beat her chest 21 times. Angered, Parshurama vowed that he would take revenge upon the Haihayas 21 times. He killed all the sons of Arjuna and killed all the Haihaya-Kshatriyas of the world 21 times. Thus he conquered the whole earth and donated it to the brahmanas. Thus he ended the arrogance of Kshatriyas.}

(Shivaji Maharaj is 🙂 Like the fire which burns wood, he is swift and deadly like the Cheetah against a herd of deer. Kavi Bhushan says, (Shivaji is) like a lion against wild hogs.
Stanza 4:
Translation:
Like a ray of light through the darkness, Like the Child Krishna against Kansa, Has descended upon the clan of Mlecchas(Mughals and Adilshah) Shivaji, the Tiger!

(Shivaji Maharaj is:)
Like a ray of light that shatters the darkness and he offers hope to millions of people oppressed by the cruel rule of Aurangzeb across India.
(He is) like the child Krishna who defeated his maternal uncle, Kansa in wrestling and killed him.
( This great warrior) has now descended upon the clan of Mlecchas, (Here the poet refers to Mughals and Adilshah who oppressed their Hindu subjects and tortured them in many cases. Although Shivaji Maharaj’s kingdom was a Hindu State, he never forced religion on anyone. His was a state which practiced religious tolerance.) like a Tiger!

Note:
The word Mleccha directly means a Muslim. Though the Poet has used the word in his work to portray the cruel tactics of the Muslim Rulers Aurangzeb and Adilshah and although Shivaji Maharaj established his kingdom to free the oppressed Hindu subjects from the tyranny of these two Muslim states, Shivaji never was against Muslim religion (and neither am I!). He was against the atrocities of Aurangzeb and Adilshah. Hence, I believe using the word Mleccha to denote a Muslim would be demeaning. Hence, I have not used Muslim as the literal translation for Mleccha but have used Mughals and Adilshah.

Let it be known to all those Hindu hardliners and the so-called Hindu fanatics that Shivaji Maharaj practiced, religious tolerance in his kingdom. He deeply respected Muslim religion and never demolished any Muslim place of worship.

On the contrary, his army had 1/3th part of it as Muslims. His navy had Ibrahim Khan and Maynaak Bhandari as the chiefs. He deeply respected and often sought blessings from Sufi saints like Baba Sharifuddin and also of Shaikh Yakub of Konkan.He called Hazrat Baba of Ratnagiri bahut thorwale bhau, meaning “great elder brother”.

PS: Special thanks for this poem to my friend Tejas Thatte.Thanks, Chiknya!

This work by Pranjal A. Wagh is licensed under a Creative Commons Attribution-Noncommercial-No Derivative Works 2.5 India License.